Architects design much more “blocky” buildings than previously. Buildings appear to be constructed of different inter-locking solids with overlapping planes. This gives the lighting designer more opportunity to exploit the 3D-ness of the building. Our building has a pattern of deep recesses and the lighting design exploits these characteristics.  With this type of building, the geometry and pattern of light become more important.

Floodlighting a building façade is a classic case of “It’s not about the numbers”. Lux levels and candelas per square metre are not the primary goal. However, calculating the luminance (objective brightness) may be useful if you want the building to be much brighter than its surroundings.

When floodlighting a façade, there are many non-engineering decisions to be made such as do you want the building to stand out or blend in with its background? If it has standout architecture, why not make it stand out?

A related point to the appearance is that you can save a great deal of energy by highlighting the attractive and architecturally important areas of a building rather than flooding the whole façade with uniform light. Similarly, switching off the lights, maybe after midnight when no-one is around to see the building, makes a lot of sense and can halve your energy cost.

When lighting an important façade, you can’t use any old floodlight. You will need good quality optics and tight beam control to achieve the effect you want. WE-EF is one of just a few companies who offer such a wide range of beam control accessories, visors, snoots and filters. For the technically minded, you will find that their photometric files are easy to understand.

Our building is about 24m wide and four stories high. The tower is 5m wide and 15m high. 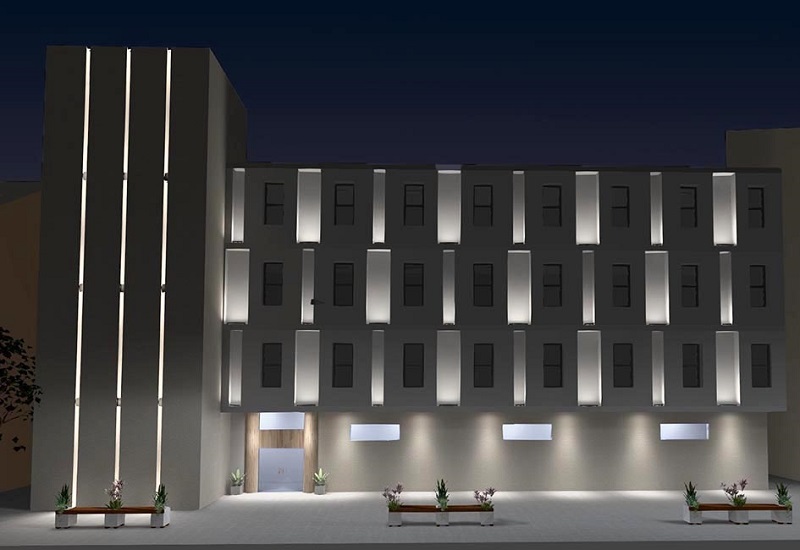 The approach here is to emphasize the geometry of the architecture. The tower has feature slots running from ground level to the roof. These slots are illuminated with VLS400 luminaires which produce a narrow beam shining both up and down. The tightly controlled optics mean that we achieve a good level of uniformity from top to bottom.

The windows, themselves, are unlit. Instead, we have illuminated the architectural recesses between them using VLR series linear wall washers. These are available in widths from 330 mm to 1,230 mm. Also note that the interior lights are switched off. Apart from saving energy, it also makes the façade look better!

At ground floor level, we have used recessed downlights, DOC140, under the canopy to produce a soft scalloping effect on the wall. The entrance door is lit in a similar manner but with a more powerful beam for emphasis. 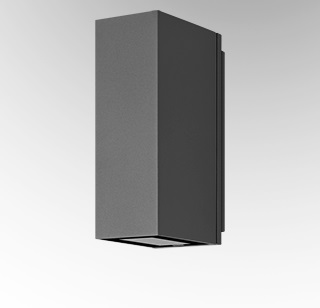 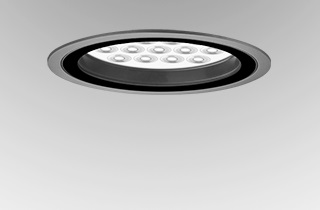 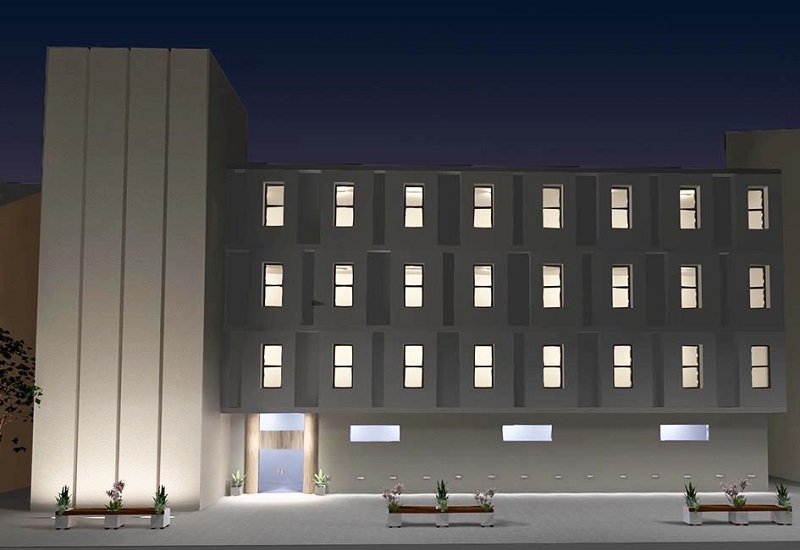 This scheme draws attention to the building, but no more. I.e. it blends with its surroundings.
The tower is illuminated using ground recessed ETV linear uplight with a narrow beam distribution. There are wider and narrower options depending on the effect you wish to achieve. It has a toughened glass lens that can withstand 5 tonnes which is useful in areas where vehicles might need access.

The remainder of the building is fairly low key.  The façade, itself, is unlit. Instead, we have used internal window lighting dimmed to a low light output to produce a regular pattern of glazing.


The under canopy walkway uses the recessed STI134 floorwasher. These provide a continuous line of light at low level. They are fitted with polycarbonate covers for extra security.

Again, the entrance is illuminated with DOC downlights to emphasize the way in. 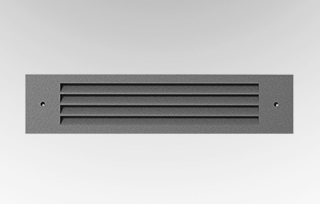 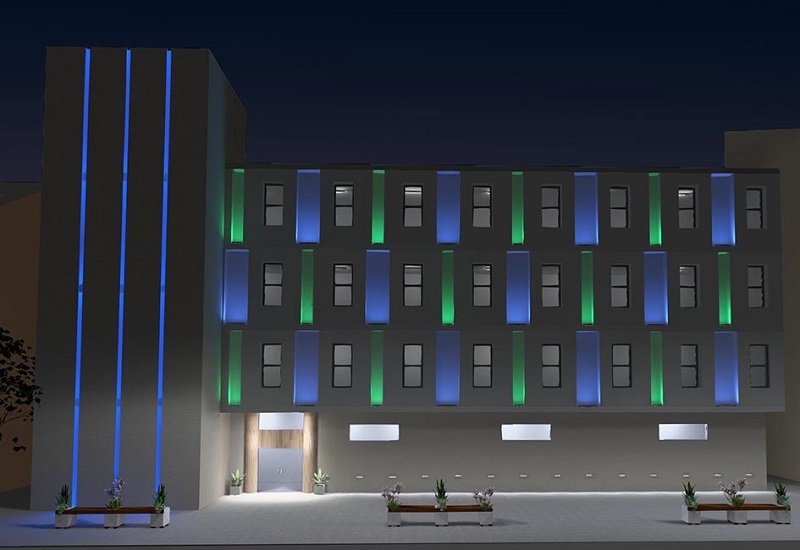 Color is a very effective way of making a building stand out. In my experience, blue is always a popular color. Cinematographers frequently use blue shadows to indicate night scenes. Another application is corporate colors for company HQs.

We have kept this fairly restrained by not making the façade too bright. The color draws attention without detracting from its surroundings. Similarly, the under canopy area uses the STL floorwasher used above.